This page is part of: Using Archives: A Guide for the Inexperienced

Won't archives be hard to read and interpret?
What does archival hierarchy mean?
Why do archive catalogues vary in the amount of information they provide?
Should I trust what I read in an archive?

Won't archives be hard to read and interpret?

Archives vary so much in terms of media, format and content, that you cannot characterise them as 'difficult' or 'easy'. They can be manuscript, typescript, printed, digital, photographs, sound recordings and many other sources, and extend from ancient manuscripts to modern digital records. However, it is true to say that some archive materials, particularly handwritten manuscripts, may not be straightforward to read or to understand. They may be in different languages, particularly Latin for legal documents (before 1733, legal documents were all written in Latin), and in different styles of handwriting. Remember that these documents were not written for a modern audience or for researchers doing dissertations. Many archives were working documents, written over time, maybe by different people. They may represent an official record, they may comprise personal letters and diaries, they may include scribbled notes and jottings.

You should not assume that archives will be hard to use, but do remember that they are not like published material - you can never be sure exactly what you will get. You may uncover amazing secrets; you may be disappointed.  This is part of the challenge, and also the excitement, of working with archives.

Medieval charters and deeds are in Latin and take some skill and experience to read. See for example our feature on The Medieval Collections of Canterbury Cathedral.

Take a look at our feature on the William Herschel Collection - there are some digitised images of observations by William and Caroline Herschel, from 1789. This is fairly typical 18th century handwriting.

The London Lives website provides some valuable context for working with and interpreting 18th century manuscripts, with some great information on researching different subjects.

What does archival hierarchy mean?

The items within an archive collection are usually inter-related. For example, one letter forms part of a series of correspondence; that series is one of several series that document the history of an organisation. A series within a collection might be letters, press cuttings, ephemera, research notes, account books, etc., or it might follow function, such as 'finance' or 'accounts'.

This context is reflected in the hierarchical way archive collections are described. 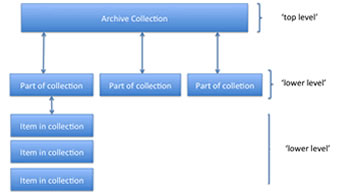 The 'collection level' is commonly referred to as the 'top level'. Often archives are described at this level - so you get a general sense of what is in the collection. Sometimes the series are briefly listed, but sometimes you only have a general overview to go on. It can then be hard to judge whether a collection is relevant to your research.

Below the collection level you have the parts of the archive. For example, it may be divided into a number of series. The aim is to reflect the way the archive was arranged when it was created - the 'original order' of the collection.

If you look at a single document by itself, you may get some evidence that is useful for your research, but you may also want to look at it in relation to the series of materials it forms a part of, or the collection as a whole. This gives context to the one item, and may shed important light on its meaning and significance. Meaning can be altered in the light of the broader context of a collection, and it can be useful to get a fuller picture.

The Papers of Samuel Davis is an example of a collection level description with a short 'scope and content' that gives some idea of the archive. It says "The account covers topics such as landscape and cultivation as well as Davis' interactions with the Rajah." This indicates the topics covered, but it is not explicit.  It would take too long for archivists to catalogue all collections like this in great detail, so that all places, people, events and topics were listed.

Letters and Manuscripts of Charles Dickens is an example of a collection described as a whole, but with a list of the contents. So, you can get a better idea than you would if the description simply said 'letters and manuscripts of Charles Dickens', but you still have 'letters from various people' - you don't know who they are or what they are about.

If you look at the description for one item, such as a Telegram from D'Oyly Carte to Bessie Bonsall (24 Nov 1896) you may find it useful for your research, but it also has a context within the Correspondence of Richard D'Oyly Carte and the whole D'Oyly Carte Archive. You may see one telegram in a different light if you place it in this bigger context.

Photographs may also need context to give them real meaning. The Papers of Millicent Garrett Fawcett lists photographs such as 'A camp'. This photograph has little meaning on its own. It is part of a series - Report on the concentration camps in South Africa. Understanding that it is part of the Millicent Garrett Fawcett Papers, and knowing more about her life and activities, will also help place this one photograph in context.

Why do archive catalogues vary in the information the provide?

The description of a collection, available on the Archives Hub, or in the catalogue of the repository, may tell you a significant amount about the size, scope, content, format and language of the material. It may tell you about it's creation and custody, about reproduction and copies, it may also indicate if documents are faded, damaged or incomplete. However, there is no exact standard for the content of an archive catalogue.  There is an international standard that recommends the minimum information to include: title, date, reference, language and name of creator. But this would only give a very basic description.

The bigget problem is time - or lack of time - to create detailed descriptions. Many archivists have 'backlogs' - material awaiting processing - and they can only spend so long on each collection.

Archives that are catalogued in great detail are often either considered highly important historically, or they are part of a funded project (usually because of their historical importance). Of course, making judgements about historical relevance is in itself problematic.

Should I trust what I read in an archive? 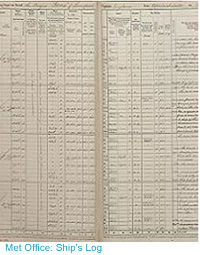 This is a judgement you need to make, based upon the nature of the material, what you know, or can find out, about the motivation for creating it, and its context. Personal diaries may be idiosyncratic, and reflect the prejudices of the author, which can make them a fascinating source; they were not usually created with historical accuracy in mind. Account books are an official record of financial transactions, so you might expect them to be trustworthy, but accounting errors - accidental or purposeful - can happen. Documents that are an official record of something, such as a ship's log, that gives details of the daily weather conditions, are likely to be trustworthy, as they simply set out to record what is observed or measured, but you must always think about the bias and accuracy of the data, as well as how complete it is. In the end any document, however official, may contain inaccuracies. And in the end 'accuracy' itself can be open to interpretation. It is one of the reasons that context is so important - it helps you to assess and interpret a document.

Digital materials introduce a whole new challenge in terms of authenticity and integrity, as it is easy to tamper with them.

Do bear in mind that materials in an archive were not usually created for historical research, so they are not likely to have a clear intellectual standpoint in the way that an article might do, when it is written in support of a particular argument, using cited sources as evidence, and when the author has the benefit of hindsight.

An article on the corn laws, for example, may be clearly in favour or against, and give supporting evidence to back up the arguments the author makes. The Guardian Newspaper archive covers the campaign to repeal the Corn Laws, and it has it's own standpoint on this. A personal letter written in the nineteenth century might provide evidence that the author is in favour of free trade, but it was not written for public consumption - the author did not expect you to be reading it over 100 years later! You might want to think about the bias of the author: Who are they writing to? What is the context in which the letter was written? Maybe they will be more honest than they might be in a published source? Does the letter shed new light on the author's beliefs and opinions?

This page is part of: Using Archives: A Guide for the Inexperienced