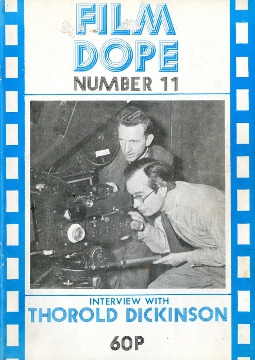 © All images are provided by University of the Arts London with all rights reserved by their respective owners.

Though highly influential, Thorold Dickinson (1903-1984) remains a neglected figure in the canon of British filmmaking and film theory. Undertaking a variety of roles – from directing to editing, supervising films for the Ministry of Information and the UN to teaching film studies - Dickinson’s work and interests are wide-ranging, and this diversity is reflected in the Thorold Dickinson Collection held at the University of the Arts London.

Dickinson began as an assistant to George Pearson in the 1920s, and in 1937 began directing his own feature length productions, starting with The High Command.  Dickinson also had a political interest in film; in 1937 along with Sidney Cole he made Spanish ABC and Beyond the Spanish Lines, films about the Spanish Republic and the fight against fascism.  The archive contains some of Dickinson’s research papers relating to the moves the Republic made to spread education and democracy in the face of reactionary forces, for example, typescripts with titles such as 'Educational Reforms Carried Out By The Republican Government In Spain Before And During The War'.

During the Second World War Dickinson made a full-length propaganda film, The Next of Kin, and numerous short films for the Ministry of Information’s Army Kinematograph Service. The archive contains scripts, daily progress reports, synopses, as well as notes and plans for these films.  After the War, he continued to make feature films, including The Queen of Spades, and also published his first book, Soviet Cinema (1948). co-written with Catherine de la Roche after his 1937 trip to the Soviet Union as an A.C.T (Association of Cine-Technicians, now A.C.C.T) delegate.

From 1956-1960 Dickinson was employed by the United Nations in the role of Chief of Film for the Department of Public Information.  This appointment was to change the way in which the UN made their films, and resulted in productions on subjects such as the Suez Crisis, refugee camps and international relief work.  The archive contains papers relating to his time working for the UN, including scripts, correspondence, reports, press releases, press cuttings.  These papers suggest that Dickinson perceived the medium of film as being invested with the ability to communicate with people universally, beyond the restrictions of language or cultural differences.

On his return to the UK in 1960, Dickinson’s career took yet another turn with the arrival of a new film course at the Slade School of Fine Art, University College London (UCL). Dickinson was responsible for the programme, and soon became the first professor of film in the UK in 1967. Dickinson also had the foresight to collaborate with other UCL departments, resulting in a number of interdisciplinary courses; one such collaboration, with the Department of History, saw him work with the historian AJP Taylor on subjects including ‘War and Revolution in the Twentieth Century up to 1945’, their intention being to teach history through the medium of film itself.  Dickinson’s papers outline all of the courses over a ten year period, demonstrating the extensive scope of his cinematic knowledge.  Dickinson’s teaching at Slade also resulted in the publication of his second book, ‘A Discovery of Cinema’ (1973).

After retirement, Dickinson continued as an advocate for film education, giving papers or acting as advisor on an international level.  His knowledge was well recognised, as shown by the papers relating to film festivals and award ceremonies in which Dickinson served as jury member, for example, at the 1959 Tenth International Festival of Documentary and Short Film in Venice.

Dickinson’s library is a wonderful compliment to the 30 boxes of archives: a collection of approximately 3,000 books and periodicals spanning most of the 20th century.  The topics include the history of cinema, biographies, film theory and filmmaking, as well as topics of a more personal interest, such as poster art.  The collection as a whole is open to a variety of uses, with each adhering to the principles that Dickinson himself would have wanted: access to film or film related material that is educational without prescription.

All images are provided by University of the Arts London with all rights reserved by their respective owners: the Thorold Dickinson Estate, Film Dope, the United Nations and the National Film Board of Canada. All images and text by Wendy Russell, Archives Assistant, with rights reserved by University of the Arts London, contact: archive-enquiries@arts.ac.uk, 020 7514 9330.