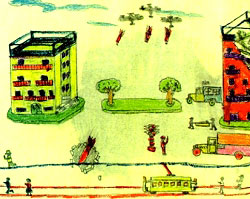 Spain became a republic in 1931. In July 1936 there was a revolt by the Spanish military against the Popular Front government, a newly-elected coalition of Republicans, Socialists and Communists. General Francisco Franco became leader of this 'Nationalist' rebellion, which received substantial assistance from Nazi Germany and fascist Italy.

The British government (of Baldwin and Chamberlain) had agreed a policy of 'non-intervention' with other Western governments. But many anti-fascist volunteers joined the International Brigades - British socialists and communists, German and Italian refugees, and others from around the world - marshalled by the Comintern, the international organisation of the Communist Party.

The Basque region, with its own distinct language and culture, was a particular focus of Nationalist violence. Anarchists and the POUM (Partido Obrero de Unificación Marxista - Workers' Party of Marxist Unification) militia also opposed the Nationalists. POUM were Trotskyist, anti-Stalinist communists who were poorly equipped, and persecuted by the Spanish and Soviet Communists.

By April 1939, all of Spain was under Nationalist control and Franco declared a victory. Over half a million people had been killed in the war, and in the next few years many tens of thousands more were executed as 'Reds'. General Franco's military regime remained in power until his death in 1975. Franco had already designated his successor, Prince Juan Carlos.

This month we highlight descriptions for the papers of political campaigners, historians, and International Brigades volunteers, the records of aid organisations, and descriptions for collections of posters, photographs, and interview material. There are also links to selected websites and suggested reading.