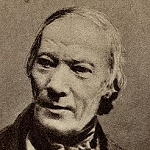 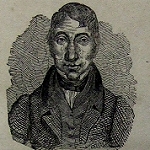 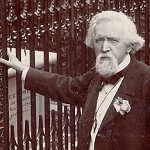 This year is the 150th anniversary of the death of Robert Owen (1771-1858), social reformer and philanthropist. Owen wished to improve conditions for factory workers and promote an ideal way of living. Born in Newtown, Wales, Owen worked in factories in Lincolnshire and London after leaving school at the age of ten. He was also an avid reader from an early age and believed strongly in the importance of education for the formation of the character. By 1785, Owen was in Manchester, at this time on the verge of industrial revolution, as well as a centre for philanthropic debate. Owen set up a spinning business that lasted for just one year. In 1799 Owen married Caroline Dale, daughter of David Dale, who owned the New Lanark Cotton Mills in Scotland, of which Owen became the manager. The community he went on to establish as a result became a model for good working conditions and promoted Owen’s belief in the importance of education by setting up a school and lecture halls there. Owen remained at New Lanark for many years, while continuing to promote his beliefs and ideas to a wider audience through lectures and writings. In 1825 Owen and his son, Robert Dale Owen, travelled to America to set up a community, New Harmony, Indiana that he hoped would be as successful as New Lanark. However, the community did not flourish and Owen returned to England in 1829. After his return, he became interested in aspects of co-operation and labour exchanges. To this day Owen remains an extremely influential figure within the co operative movement worldwide. Right up to the end of his life, Owen continued to write and lecture on social issues. He died aged 87 while visiting Newtown, the place of his birth.

The National Co-operative Archive holds Owen’s correspondence collection, which contains over 3000 letters as well as a large collection of books, journals and pamphlets written by him.

This month we highlight the archival descriptions for the papers of Robert Owen aned related collections. There are also links to selected websites and a brief bibliography.

With thanks to Stefan Dickers, Archivist, Bishopsgate Institute