Town and Townscape: The Work and Life of Thomas Sharp 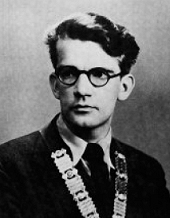 Town and Townscape: The Work and Life of Thomas Sharp is a collaborative project between Newcastle University's Library Special Collections and the School of Architecture, Planning and Landscape. It has made a major resource on the town planner and writer Thomas Sharp accessible for scholarship for the first time. The project is funded by the Arts and Humanities Research Council. The launch of an exhibition is timed to coincide with an international conference held as part of the project activities, Visual planning and urbanism in the mid-twentieth century, September 13th-15th, 2007.

Thomas Sharp (1901-1978) was a key figure in town planning in the mid-twentieth century. The concepts he developed in his writings and plans have been of enduring significance and influence on thinking about planning and design for both practitioners and academics in the UK and beyond. One of his best known contributions was as a major influence on the development of ideas of townscape.

The mid-twentieth century was a period when public and professional interest in planning was at an all-time high. Sharp was a key figure in defining thinking about the forms that town and countryside should take; in reconciling existing and valued character with modernity, and; in making these arguments accessible. His book Town Planning is the most widely-read ever on the subject and followed earlier influential polemical works. The plans he produced in the 1940s, primarily for historic cities such as Oxford, Exeter and Durham, were also hugely influential.

Sharp used some of his later under-employment in an attempt to further another of his ambitions, as a creative writer. He had written some poetry since his youth but turned more seriously to this about the age of 60. Some of the poetry made its way into print, and some was broadcast by the BBC, but most did not. He wrote two novels and some novellas, all of which remain unpublished. This collection includes correspondence with publishers Carcanet Press and Victor Gollancz Ltd, and with the poet Sir John Betjeman (1906-1984) and also includes Sharp's creative works of poetry, novels, radio plays and so on, largely unpublished.

- Text from the conference brochure by John Pendlebury, Director of Planning at the School of Artchiteture, Planning and Landscape at the University of Newcastle Institute for Policy and Practice, and reproduced here with kind permission. Photograph of Thomas Sharp courtesy of Newcastle University Library Special Collections.