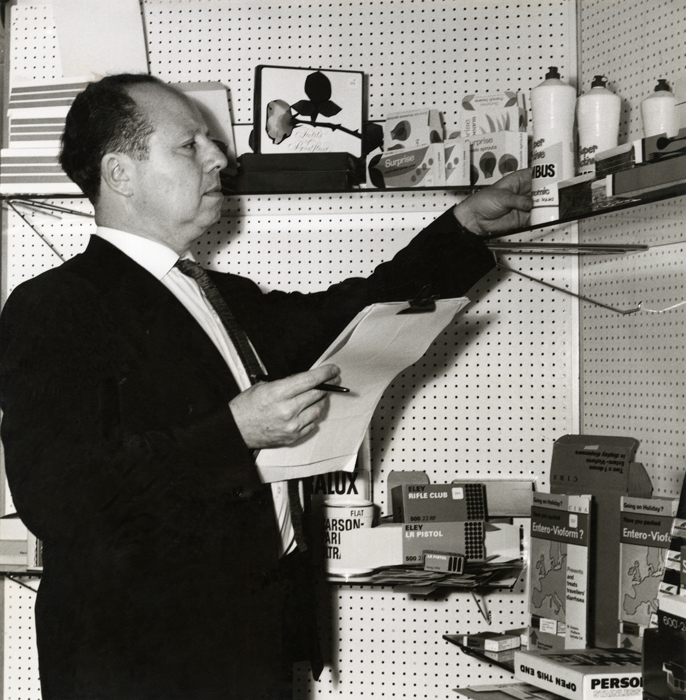 This month’s Hub feature marks the launch of a new archive catalogue by the University of Brighton Design Archives, documenting the papers of the graphic and information designer H A (Arnold) Rothholz (1919-2000).  The catalogue records are now available on the Archives Hub, some with attached images, and will be enhanced with further digital objects and some additional item records over the next few months.

Born in Dresden, Germany, Rothholz emigrated to London with his family in 1933, to escape the Nazi regime.  He studied at Willesden School of Art and then trained in Commercial Art at the Reimann School, London, an offshoot and successor of the renowned Reimann Schule in Berlin, and the first commercial art school in Britain.  Here Rothholz would have been exposed to design ideas influenced by the Bauhaus and other proponents of international modernism in his country of birth, ideas which were still fairly new in this country.  Thus he joined the ranks of émigré artists who helped to spread such ideas in pre- and post-war Britain: like many of them, he contributed to that post-war national celebration, the Festival of Britain, a fact which unites him with many of the other designers represented in the Design Archives: FHK Henrion, James Gardner and Natasha Kroll, to name but three.

After a brief period of internment in the early part of the Second World War, Rothholz began to establish a successful career as a graphic and information designer.  In the 1940s, he began to design posters for the Royal Society for the Prevention of Accidents (RoSPA) and the Post Office, a full set of which are in the archive. He retained a connection with his country of birth through his involvement with émigré organisations such as the Free German League of Culture (FGLC) in London, for whom he designed a series of fundraising ‘stamps’ for their exhibition ‘Allies Inside Germany’, 1942.   He also produced several designs in connection with the 1948 London Olympics.   In many ways, Rothholz’s career can be seen to reflect the evolution of the design profession in the twentieth century, starting in exhibition and poster design in the 1940s, working as a consultant designer in the 1950s and then attempting to move into the emerging field of unified corporate design in the 1960s, for example with Winsor & Newton and Wellcome.  He was elected a Fellow of the Society of Industrial Artists in 1962, perhaps in recognition of his work designing the Society’s exhibition ‘The Art of Persuasion’ in 1961, as well as his service on the SIA’s Council.

Rothholz’s archive documents a wide range of his work, as well as offering some more personal insights.  His art school drawing books shed light on the curriculum and methods of pre-war art education; while a small body of material about the Reimann school illuminates an important institution of which little documentation remains.  At the core of the archive is the documentation of professional commissions, from smaller-scale scale graphic work to exhibition design.  The later story of his involvement with Winsor and Newton over more than a decade offers a richly informative vignette of the efforts of a consultant designer to establish a more formal and secure footing, aspiring to a complete corporate identity scheme. Meanwhile, there are many newspaper and journal articles marking career highlights and documenting responses to his work.

The archive was transferred to the Design Archives by Rothholz’s family in 2008. Rothholz’s son, Stephen Rothholz, also a designer, has enriched the cataloguing process with further contextual information about the material, particularly important as little has yet been published about Rothholz and he remains under-researched.

The Rothholz archive complements other collections held at the Design Archives, which together form a rich and interconnected body of documentation of design practice and networks from the 1940s onwards, focusing on Britain but with strong international links.  Here Rothholz sits alongside contemporaries in graphic and other fields of design, such as FHK Henrion and James Gardner; as well as institutions such as the Council of Industrial Design (later the Design Council), which, from its establishment in 1944, was a focal point for the commissioning and promotion of design.

Written for the Archives Hub by Sue Breakell from the University of Brighton Design Archives.

All photos from the University of Brighton Design Archives, H A Rothholz archive, and by courtesy of the Rothholz estate, unless otherwise stated. 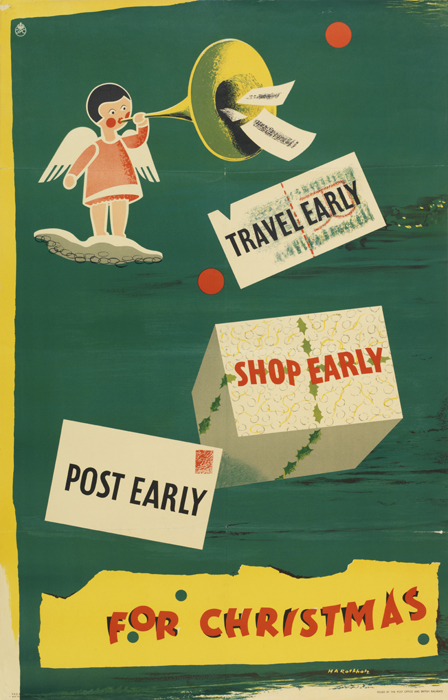 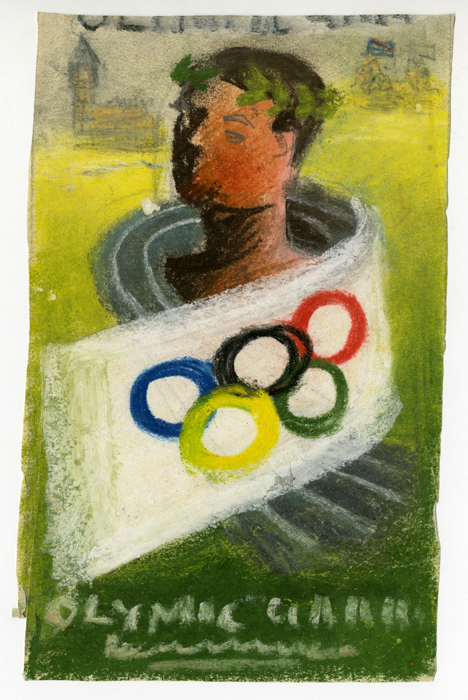 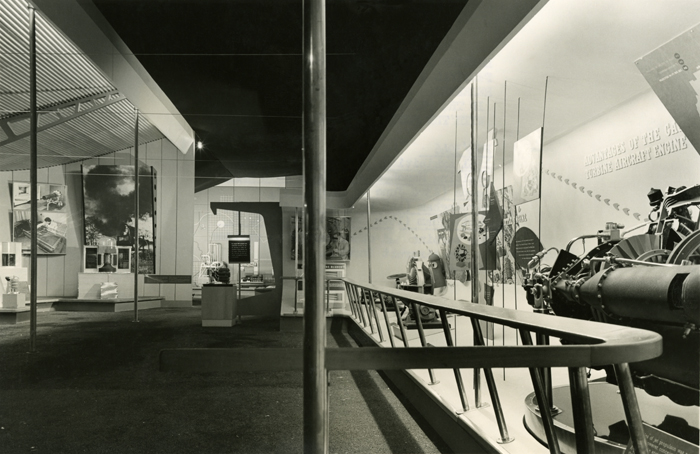 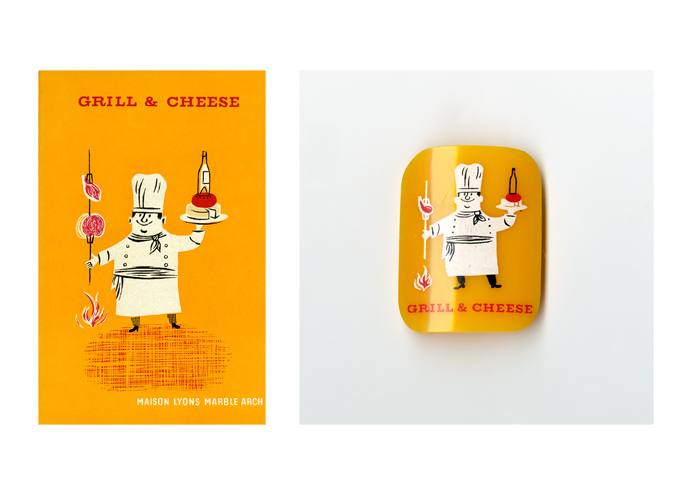 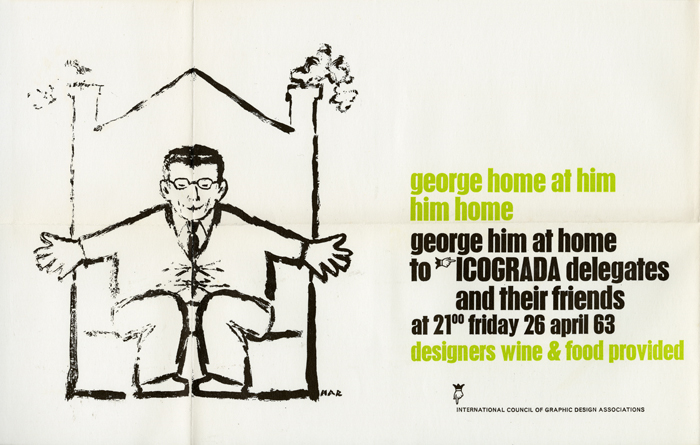 DES/RHZ/1/1/20 Leaflet 'George Him at Home to Icograda delegates and their friends', 26 April 1963. Designed by Rothholz.