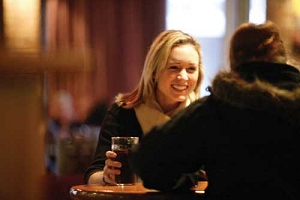 As we start to enjoy the beautiful British summer time, here at the Archives Hub our thoughts often turn to beer and beer gardens. We thought we ought to celebrate this by devoting our August feature to pubs and all things hostelry and alcohol related.

Pubs and public houses or similar types of institution have been supplying the people of Britain with alcohol since Roman times and the introduction of the first road network in the British Isles. Tabernae were built to serve food and wine to travellers. These tabernae evolved into alehouses, inns and taverns with the inn or coaching inn coming to prominence at the dawn of the Industrial Revolution.

The Industrial Revolution also saw the birth of large regional breweries who began to buy up local public houses with a view to renting them out to publicans with the condition they sold their beer exclusively. This began the relationship between brewery or landlord and publican that still exists today. Today there are many different types of pubs and inns to cater for almost every whim a drinker may have. From gastropub, to microbrewery to large chain theme pubs our high streets continue to have pubs to feed and 'water' their communities.

Photograph © The University of Manchester.

So this month we're highlighting descriptions for the records of breweries, licensed premises, and trade associations, plus the papers of pub users and temperance campaigners. There are also links to selected websites and suggested reading.

Christmas at the Co-op