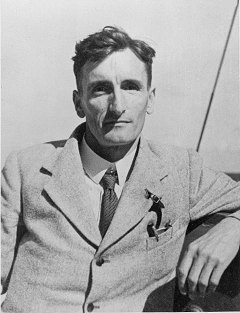 The Climate Change Bill is going to Parliament soon, and this month (November 2007) we look at climate change and the solar alternative to fossil fuels. This includes links to selected websites and a brief bibliography.

Guy Stewart Callendar (1898-1964), a noted steam engineer and amateur meteorologist, revived the 19th century carbon dioxide theory of climate change in 1938 with the publication of his paper "The Artificial Production of Carbon Dioxide and its Influence on Temperature".

Although an amateur, Callendar was working from his home in West Sussex on a truly gobal scale analysing world data and formulating a coherent theory of infrared absorption by trace gases.

Through World War II he published two papers while working on technical problems (including infrared absorption) with the Ministry of Supply. In 1944 climatologist Gordon Manley noted Callendar's valuable contributions to the study of climatic change. A decade later, Gilbert Plass and Charles Keeling consulted with Callendar as they began their research programs. Just before the beginning of the International Geophysical Year in 1957, Hans Seuss and Roger Revelle referred to the 'Callendar effect', defined as climatic change brought about by anthropogenic increases in the concentration of atmospheric carbon dioxide, primarily through the processes of combustion. In other words, caused by the use of fossil fuels.

The G.S. Callendar Archive contains some 95 notebooks (1936-1964) and documents containing data, charts, notes, readings and formulae concerning temperature and climate as far back as 1751 and in locations across the world; letters, reviews and many candid insights into the state of climate science between 1936 and 1964.

A digitised version of the archive is available for purchase from the Royal Meteorological Society. This is sold separately as a companion guide to James Rodger Fleming The Callendar Effect: Life and Work of Guy Stewart Callendar (1898-1964), the Scientist who Established the Carbon Dioxide Theory of Climate Change. American Meteorological Society, 2007.

Where possible links are provided to records on Copac for these items. Copac is the free, web based national union catalogue, containing the holdings of many of the major university and National Libraries in UK and Ireland plus a number of special libraries. For more information about accessing items see the FAQs on the Copac website.