60 years of faith and conflict 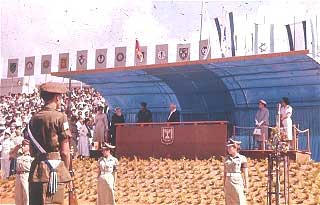 May 2008 is the 60th Anniversary of the Declaration of the Establishment of the State of Israel. Photo: David Ben-Gurion addresses a parade, 1950s. From the Torrance Collection, and copyright © University of Dundee. [link to larger image]

The Archives Hub describes collections in academic repositories across the UK. A few of these describe the history and geography of Israel and Palestine and the wider region, the Jewish national experience in the nineteenth and twentieth centuries, and the contentious paths towards the establishment of the State of Israel as well as the stormy and precarious existence of the country and the struggle between the Jewish and Arab peoples over sovereignty since 1948. This month we highlight related archival descriptions. There are also links to selected websites and a brief bibliography.

On May 14, 1948 - the day of the expiry of the internationally approved British Mandate over Palestine - the Jewish People's Council (Va'ad Leumi) gathered at the Tel Aviv Museum, on Rothschild Boulevard, Tel Aviv, and approved a proclamation which declared the establishment of the State of Israel. The Declaration of the Establishment of the State of Israel was read by David Ben-Gurion, a date that for the Jewish is the Sabbath eve, 5th Iyar, 5708. It was heard by thousands in the first direct broadcast by Kol Israel which would become the country's national radio station.

Some months earlier, in November 1947, the United Nations General Assembly in its resolution 181 had approved the creation of a Jewish state and called for the partition of what remained of British Mandate Palestine into a Jewish state and an Arab state. Earlier, in 1922, the League of Nations (the predecessor of the UN) had recognised the historical connection of the Jewish people with Palestine and also the grounds for reconstituting their national home in the region. Also in 1922, the Arab state of Transjordan (now called Jordan) had been created out of some seventy-five percent of British Mandate Palestine.

The Arabs rejected the United Nation's 1947 partition plan on the grounds that it allotted 55% of the land of Palestine to the Jewish minority and also because the Jewish migration to Palestine facilitated by the British was unlawful. During the war that followed the 1948 declaration 750,000 Palestinians were expelled or fled from the territories. What followed was a long and bloody conflict concerning the rights of the Jewish and Palestinian states to the land partitioned in 1947, a conflict that remains very much to the forefront of Middle East politics to this day.

Note: The Archives Hub is not responsible for the content of external websites.