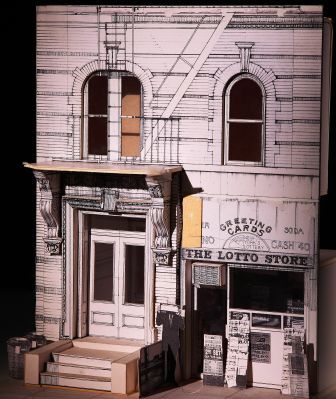 The collections include pre-production designs such as this model for a shop front for Eyes Wide Shut. Although set in New York the film was made in and around London and so care was given to re-creating the atmosphere of New York. The material for Eyes Wide Shut includes thousands of research photographs of streets, offices, surgeries and so forth in London to find portions that could be turned into New York.

Models were also used to set up scenes for Full Metal Jacket and to create spacecraft in 2001: A Space Odyssey - the models did not survive but images of them still exist.

Photograph courtesy of the Stanley Kubrick Archive at University of the Arts London. Contact: archive-enquiries@arts.ac.uk, 02075149335.