Can you dig it? 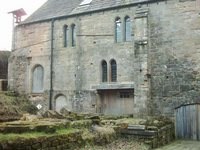 This month the Hub highlights descriptions for the papers of antiquarians (who largely study ancient Greece and Rome), anthropologists (who study cultures), and archaeologists.

July 15th-24th, 2006, is National Archaeology Week. Human history dates back perhaps some two million years, but writing has only been developed for a few thousand, and of course not every culture has written records. Archaeologists therefore study the past through its material remains, cultural artefacts, and the shaping of the environment. It's not just about excavations, and not just about ancient times - archaeologists also look at industrial heritage, for example, and even the peace camp in Berkshire at the end of the last century.

Right: At around 800 years old, Fountains Mill, Yorkshire, is the finest surviving example of a monastic watermill. Photograph by Jenny Mitcham, University of York. Image courtesy of Archaeology Image Bank.