In 1895, the interior of continental Antarctica was entirely unknown, as was much of its coastline. At the 6th International Geographical Congress a motion was adopted declaring "the exploration of the Antarctic Regions" to be "the greatest piece of geographical exploration still to be undertaken". During the following 25 years, no less than sixteen major expeditions were to be sent to Antarctica during an episode widely referred to as 'The Heroic Era of Antarctic exploration'. Amongst the various national expeditions organized was one from Scotland. Its leader, William Bruce, was one of the most capable polar scientists of his generation. Today, his name is less well-known than those of his contemporaries Robert Falcon Scott and Ernest Shackleton, but 100 years on from the departure of his expedition, there is growing appreciation of his achievements and those of his Antarctic expedition. 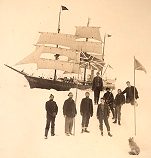 Scotia and crew off Coats Land

The Scottish National Antarctic Expedition left Britain on 2 November 1902, reaching the Falkland Islands in December, continuing south to make the first oceanographic exploration of the Weddell Sea. Scotia, with a complement of 33, wintered at Laurie Island, South Orkney Islands. Here a meteorological observatory "Omond House" was established on 26 March 1903. The island was mapped, and when the engineer of Scotia, Alan Ramsay, died during the Antarctic winter, his grave became the first in the island cemetery. Scotia revisited the Falkland Islands in December 1903 then called at Buenos Aires, Argentina, where transfer of the meteorological station to the Argentine government was arranged through the British Legation. Scotia sailed to the Falkland Islands for a third time then back to Laurie Island where the transfer was made on 22 February 1904. This second southern voyage saw the discovery of the northern part of Caird Coast, Coats Land (named for two brothers who had funded much of the expedition). With no landing possible on the Antarctic continent the ship then called at Gough Island and Cape Town, South Africa. A comprehensive scientific programme was conducted throughout the expedition; cine photographs and sound recordings were made.

Laurie Island is now the oldest continuous meteorological station operating in the Antarctic. The Argentine government has maintained and rebuilt it at various times. The ruins of Omond House remain; they are one of the historical sites declared under the provisions of the Antarctic Treaty. The original magnetic observatory remains in use and a building, constructed in 1905, is also preserved. The latter, now called "Casa Moneta", houses a small museum on the history of the island.

William Speirs Bruce, the expedition leader, had previously visited Antarctica as a member of the whaling reconnaissance from Dundee in 1892. He was a member of the Jackson-Harmsworth Expedition (1894-1897) to Zemlya Frantsa-Iosefa, in the Arctic. On his return from the Antarctic in 1904 he planned a major expedition which, among many other objects, included a Trans-Antarctic traverse through the South Pole. This was to begin in 1911 but did not eventuate. Subsequently he was involved with the Scottish Spitsbergen Syndicate working on Svalbard.

The Archive: There are several archival collections appertaining to the expedition - these include collections by Bruce, and fellow expedition members Robert Mossman, James Hunter Harvey Pirie, Thomas Robertson (captain of Scotia), Robert Neal Rudmose Brown, David Wilton, expedition secretary James Ferrier, and accountant Thomas B Whitson. The Archive also holds ships logs and plans for the expedition ship Scotia, and material relating to Omond House.
The Picture Library: Holds 20 photographic collections, which relate to the expedition and its members.
The Museum: To celebrate the centennial of the establishment of the observatory on Laurie Island the museum has a display showing a selection of photographs, documents and other items pertaining to the expedition in general and the observatory including the subsequent Argentine operations to the present. The museum is open to the public Monday to Friday 2:30pm to 4pm.
The Library: The library holds published scientific results of the expedition, general histories and biographies of expedition members.