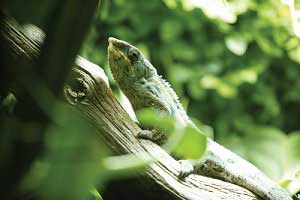 Darwin was born in Shrewsbury, Shropshire, the grandson of the prominent naturalist and physician Erasmus Darwin (1731–1802) and also of the celebrated potter Josiah Wedgwood (1730-1795). Darwin studied medicine in Edinburgh and natural history at Cambridge, and one of his tutors there, J.S. Henslow (1796-1861), obtained for Darwin the position of naturalist aboard the HMS Beagle which undertook a 5-year scientific survey of South America in the 1830s. It was while travelling with the Beagle that Darwin was impressed by the incredible diversity of living things, and began to formulate his theory of evolution by natural selection. Darwin then spent many years gathering evidence in support of his theory.

The naturalist A. R. Wallace (1823-1913) had, independently of Darwin, also developed the idea of natural selection as the basis for evolution. Darwin and Wallace presented their papers together in 1858, and this was followed the next year by the publication of Darwin's great work On the Origin of Species.

Darwin explained the evolution of different species as a process of very gradual change over many, many generations, with gradual modifications from earlier forms. The starting point for change might be a minor genetic variation. A variation which improves the chances of survival of a particular living thing would improve its chances of reproduction and of passing that beneficial variation on to the next generation, which in turn would also be more likely to survive. This is 'natural selection'. Complex modifications may develop in this way over extremely long periods - ‘geologic’ time - with many new species evolving over millions of years.

photograph (top right) of vivarium in The Manchester Museum, copyright © The University of Manchester

You can receive regular updates on our special features by joining our mailing list.
Archives Hub Blog: Charles Darwin and Evolution.