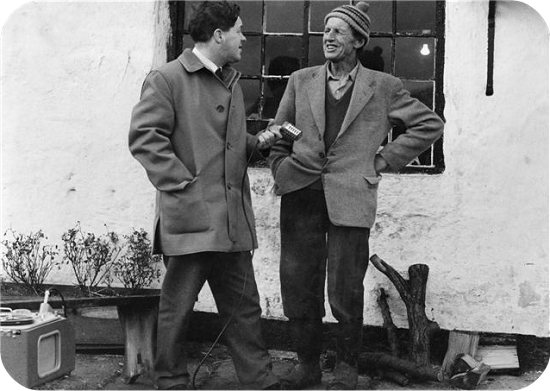 Above: Stanley Ellis, Survey of English Dialects fieldworker, with informant at Addingham Moorside, near Ilkley (West Yorkshire), around 1967.

Established by dialectologists Harold Orton and Eugen Dieth, the Survey was carried out at a time that Orton felt was "ripe for
one more, and possibly the last, coordinated large-scale investigation of the all-important English dialects." To this end, fieldworkers were engaged in collecting data between 1950 and 1961 in over 300 localities. The data was collected using a Questionnaire compiled by Orton and Dieth containing over 1000 individual questions. There followed a publication programme culminating in the presentation of edited fieldwork data in 4 multi-part volumes (1962- 1971), and the Linguistic Atlas of England (1978).

The Leeds Archive of Vernacular Culture comprises the multiple media archives of the Survey of English Dialects (around 1945-1978) and
the University of Leeds Institute of Dialect and Folk Life Studies (1964-1983), and is currently the subject of a 3-year AHRB-funded
cataloguing project.

The University of Leeds will be hosting a conference entitled "Dialect and Folk Life Studies in Britain: The Leeds Archive of
Vernacular Culture in its Context," which will include discussion of dialect resources in Britain, on Saturday 19 March 2005.

The work on the Archive is on-going, and a collection-level description will be available on the Archives Hub when the finding aid is launched in May 2005. In the meantime, information on both the Archive and on the project is available from the LAVC website.

Photograph above courtesy of the Leeds Archive of Vernacular Culture (University of Leeds).