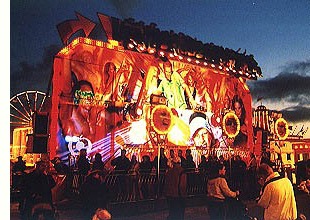 This month, October 2008, we're looking at two of the collections held at the National Fairground Archive in Sheffield. There are photos from the collections and also links to selected websites and some suggested reading about fairs and circus and fairground history.

The Malcolm Airey collection contains a large number of circus programmes both British and international and include examples of Billy Smart and Robert Bros. circuses among others. There are programmes from touring shows which travelled the length and breadth of the UK and also from circuses in permanent structures such as the Blackpool Tower circus. The programmes date from the early 1940s until early 2000 and list a variety of acts that graced the circus ring, showing the change and development as the years progressed.

October 11th, or the Friday nearest to it is the official date for Hull Fair, the biggest and one of the oldest fairs in Europe. For two weeks, the streets of Hull are taken over by a huge amount of rides and stalls. In the 18th century the fair was dominated by jugglers, theatrical booths and puppet shows while from the early 19th century the famous Wombwell Menagerie show appeared, which introduced the people of Hull to their first sights of wild animals. The introduction of mechanisation in the 1870s brought new life to the fair and in a period when many historic fairs were lost with the passing of the Fairs Act in 1871, the people of Hull remained loyal to their annual feast. During the 1800s the fair was held at a variety of locations ranging from the Market Place to Brown Cow Field outside the town; it eventually moved to Park Street in 1865 on the Corporation Field. In 1888 Hull Fair moved to its present home on Walton Street, with the original site doubling in size in 1906 to sixteen acres, making it the largest fair in England at that time.

The last century has seen many changes at Hull Fair with each year bringing new and wondrous delights for those who attend the annual carnival. Fashions come and go on the fairground with the showpeople keeping one step ahead of their competitors and vying with each other to bring the latest attraction to the October Fair.

The National Fairground Archive commenced a major project documenting the history of the Hull Fair from the point of view of the local people and the showmen who attend.

You can receive regular updates on our special features by joining our mailing list.
Archives Hub Blog: The Big Draw 2008: The Big Wheel.

Christmas at the Co-op