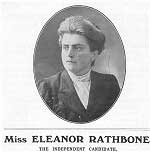 The Rathbones of Liverpool were a family of non-conformist merchants and shipowners, whose sense of high social consciousness led to a fine tradition of philanthropy and public service.

The family origins are traced to Gawsworth, near Macclesfield, where the first William Rathbone was born in 1669. His son, William Rathbone II, born on 22 May 1696, left Gawsworth for the growing port of Liverpool where he worked as a sawyer and, it appears, established a timber business.William Rathbone III (1726-1789) developed the business during the eighteenth century, whilst also establishing an international merchanting concern. These early business ventures led, after a series of partnerships, to the creation of Rathbone Brothers and Co. in 1824. This illustrious Liverpool merchanting firm traded during the nineteenth century in a variety of commodities including American cotton, China tea and silks and Brazilian coffee, and has involved the energies of several members of the Rathbone family, through the generations, as partners. Rathbone Brothers Plc is still going strong today and is a leading independent provider of investment and wealth management services for private investors and trustees.

The Rathbone Papers in the University of Liverpool Special Collections and Archives are the records of several generations of the Rathbone family of Liverpool, incorporating papers relating to their works of social and political reform, their business ventures, and their family life; dating from the late 18th to the late 20th centuries. The collection includes a log book dating from 1742 (ref no. RP XXIII.4) from which the Rathbones have derived an establishment date for the business.

The papers provide a rich and fascinating view of the Rathbones' political, religious, business and personal affairs. The arrangement of the papers is chiefly by individual family member or family groups, although papers relating to a single family member may be found in several different groups. The original collection of Rathbone papers was deposited with the University of Liverpool by Lady Warr, Richard Reynolds Rathbone and Hugo Ponsonby Rathbone in 1954, and to these records have been added a series of further gifts by family members, including records of Eleanor Rathbone (1872-1946), additional Rathbone Brothers business records, papers of Hugh and Emily Evelyn Rathbone, their son, Reynolds and his wife Sybil (deposited 1987), a large group of material, included many photographs, deposited by William Rathbone X (1993) and material from the estate of Dr B.L. Rathbone (deposited 2003).

The Rathbone Papers contain large photographic collections which include scenes from the late 19th and early 20th century with images of early family holidays, and special events such as Naval Reviews which provide a great insight into the social history of the time. The following selection of photographs show William Rathbone IX skiing in 1928 (RP XXV.7.312 a (1-4)); photograph taken at St. Andrews around 1909 of former Captains of the St. Andrews golf club (including Leslie Balfour-Melville) discussing the game - Leslie Balfour-Melville was a real all-rounder, he captained Scotland to victory over Australia at cricket in 1882, played rugby for Scotland and was British Amateur Golf Champion. And finally a photograph of travels in India showing scenes of religious festivals and customs 1909-10 (RP XXV.7.720). The images below are links to their archive catalogue description: 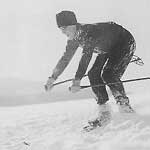 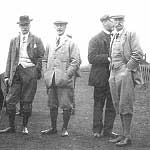 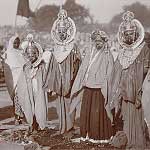 Photographs courtesy of the University of Liverpool Library.

The Rathbone Papers are arranged according to family members and contain the records of many prominent members of the Rathbone family such as Eleanor Rathbone. Eleanor Florence Rathbone (12 May 1872 - 2 Jan 1946) became the first woman to be elected to Liverpool City Council, serving the Granby Ward as an Independent Councillor, 1909-1935. Eleanor was also closely associated with the fight for equal citizenship for women; the Liverpool Women's Suffrage Society was established largely through her efforts in 1909 and in an election address of 1910, Eleanor stated her belief that: "the interests of women should be directly addressed by someone of their own sex." She later founded the first Women's Association in Liverpool in 1913 to promote women's involvement in political affairs, partly through education in political and civil questions.

In 1929 she was elected as Independent M.P. for the Combined Universities, a position she held until the year before her death. During her parliamentary career, she was Chair of the Family Endowment Society; Member of the Children's Minimum Council and Joint Committee for Spanish Relief and Honorary Secretary for the Parliamentary Committee on Refugees. The cause perhaps most often associated with Eleanor Rathbone was the campaign to introduce Family Allowances, which succeeded against great opposition, with the passing of the Family Allowance Act in the year before her death.

Eleanor was acknowledged as being one of the first to realise the potential danger from Germany and the Nazi Party during the early 1930s. She joined the British Non-Sectarian Anti-Nazi Council to champion human rights and was instrumental in petitioning the Secretary of State for Foreign Affairs to prevent the exportation of aero-engines or other parts of aircraft liable to be converted to military use. 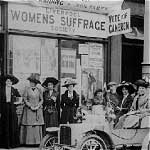 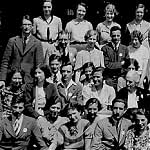 Photographs courtesy of the University of Liverpool Library