Viceroys and Chief Secretaries: the British government of Ireland, 1560-1921

From the Tudor attempts at conquest and colonisation to the present day, Ireland has been a major preoccupation of the English, and afterwards the British, government. Among the Bodleian Library's major collections of early modern State Papers and private papers of 19th and 20th century politicians, the governance of Ireland looms very large. Sir Thomas Bodley's own brother, Josias, was a military engineer in Ireland at the very time 400 years ago when the Bodleian first opened its doors to readers.

The Library's holdings include the papers of two Viceroys from the 16th and 17th centuries, and two from the 19th century; they also include papers of several Chief Secretaries, including papers of four of the last six before the creation of an independent Ireland in 1921.

The papers of Thomas Carte, the 18th-century biographer of the 1st Duke of Ormonde, include two of the most important collections for the period. Sir William Fitzwilliam (1526-1599) was a Lord Justice in the early 1560s and Lord Deputy, 1571-1575 and 1588-1594. His papers include letters from Queen Elizabeth and the principal officers of State, as well as letters from the presidents and councils of Munster and Connaught, and copies of letters written by Fitzwilliam himself. The vast bulk of the Carte collection comprises the papers of James Butler, 1st Duke of Ormonde (1610-1688), Lord Lieutenant, 1644-1650, 1662-1669, 1677-1685. They include military and political correspondence relating to the Civil War in Ireland, with many papers concerning peace negotiations with the Confederate Catholics. 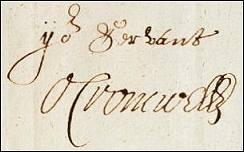 There are many other State Paper collections in the Library which include significant sources for the history of Ireland. The Clarendon manuscripts, comprising the papers of Edward Hyde, 1st Earl of Clarendon (1609-1674), and the Nalson and the Tanner manuscripts, which include official papers of Parliament, contain much relating to the Civil War, Interregnum and Restoration in Ireland. The Laud manuscripts include four volumes relating to Irish affairs in the late 16th and early 17th centuries. The letterbook, 1584-1586, of John Perrott (?1527-1592), Lord Deputy, is in the collection of Perrott manuscripts.

The Library holds very few government papers relating to Ireland from 1700 to 1847, but from 1847 to 1921 the holdings become very rich. There are very full archives of two 19th century Lords Lieutenant. The papers of George William Frederick Villiers, 4th Earl of Clarendon (1800-1870), include correspondence with British and Irish officials in the crucial years of the Famine, the Young Ireland rebellion and serious Orange disturbances, 1847-1852. The papers of John Wodehouse, 1st Earl of Kimberley (1826-1902), give many details on all aspects of the government of Ireland during his lieutenancy, 1864-1866, and include his personal views in his diary. Apart from Viceroys' papers, much relating to the government of Ireland can be found in the papers of a Prime Minister, Benjamin Disraeli (1804-1881), and of a Home Secretary, Sir William Harcourt (1827-1904). Both these collections include much correspondence with Viceroys and Chief Secretaries, and the Harcourt papers include correspondence relating to Irish secret service work, 1882-1885, during the 'Dynamite War'.