Charles Darwin and the Beagle Collections in the University of Cambridge

A Voyage Round the World 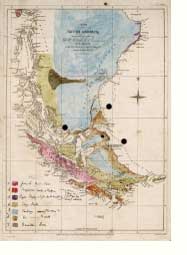 This month we highlight descriptions for the papers of Charles Darwin, his family, and fellow scientists. There are also links to selected websites and some suggested reading.

It has been described as ‘the most significant gap year in history’. In 1831 Charles Darwin left England aboard HMS Beagle as an able but untried Cambridge graduate. He returned from the voyage in 1836 as an eagerly awaited member of the scientific establishment. Cambridge played a vital role in this transformation. Darwin’s Cambridge connections secured his place on the Beagle; his Cambridge friends and teachers sent advice, encouragement and responses to his ideas, and arranged for his discoveries to be promoted and published; and it was to Cambridge that vast numbers of specimens were shipped in caskets, barrels, jars and pill-boxes.

Today, Cambridge University Library houses the world’s major archive of Darwin manuscripts, books and letters; elsewhere in the University are significant collections of his rocks, minerals, fossils, animals, birds and plants. As part of the celebrations marking the bicentenary of Darwin’s birth and the sesquicentenary of the publication of On the origin of species by means of natural selection, the Library is mounting an exhibition exploring the Beagle voyage as the pivotal experience in Darwin’s life.

The exhibition's title comes from an inscription inside one of the books Darwin took with him on the journey, a present from the Cambridge Professor of Botany: ‘J. S. Henslow to his friend C. Darwin on his departure from England upon a voyage round the World’.

The exhibition will be co-ordinated with temporary and permanent exhibitions elsewhere in the University, and together these will provide an unparalleled opportunity to explore Darwin’s life and work.

A Voyage Round the World was held at The Exhibition Centre, Cambridge University Library July-December 2009.

Caricature of Darwin as a student riding on the back of a beetle, done by a Cambridge friend of his, Albert Way. CUL MS DAR 204:29.

Cambridge also have Charles Darwin: Autobiography [GB 12 MS. Add.8853] Written in 1876, this manuscript was presented to Cambridge University Library in 1962. The full text of the autobiography is available online through Project Gutenberg.

Above right: Inscription inside the first volume of a copy of Alexander von Humboldt’s Personal Narrative, given to Darwin by John Stevens Henslow. Darwin Library, Cambridge University Library.

With thanks to John Wells and the team at Cambridge for producing this interesting and comprehensive feature for us.

July 2009: Charles Darwin and the Beagle Collections in the University of Cambridge .