Bicentenary of the birth of Charles Dickens 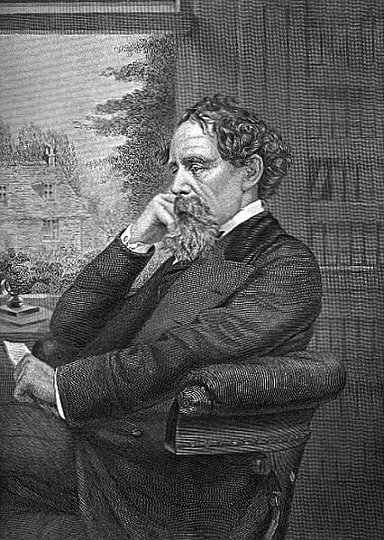 Charles John Huffam Dickens was born on 7th February 1812 in Portsmouth. Although he initially attended school, the defining moment of his life occurred when he was 12 years old. His father was sent to prison for bad debt and the family, except Charles, was also imprisoned. Charles was withdrawn from school and forced to work in a warehouse. This gave him first-hand experience of poverty and eventually he became the most influential voice of the working classes in his time. The effects he endured in his young life fed directly into two of his best known novels David Copperfield and Great Expectations.

His literary career began as a journalist and shorthand reporter getting work on his uncle’s paper the Mirror of Parliament. Having developed contacts in the press he became recognised as a parliamentary reporter and wrote for the Morning Chronicle. While still a reporter, he adopted the pseudonym of Boz and published his first book, a collection of stories Sketches by Boz in 1836. Many of his writings were originally published serially, in monthly instalments, a format of publication which Dickens himself helped popularise.

Eventually his main profession was as a novelist but he still continued his journalistic work editing periodicals and working for charitable organisations. He was an enthusiast of the theatre, wrote plays and gave readings, even performing in front of Queen Victoria. He travelled abroad extensively, wrote travel books and lectured against slavery in the United States.

Charles Dickens was a prolific 19th Century English author and considered to be the greatest of the Victorian period. At a time when Britain was a major economic and political power of the world, he highlighted the life of the poor and disadvantaged within society depicting the social classes and values of the time. He is credited with creating some of English literature’s most iconic characters and was well-known during his lifetime, being widely read throughout Europe.

He died on 9th June 1870 and is buried in the Poets' Corner of Westminster Abbey.

© Images are in the public domain.

Celebratory events are taking place throughout 2012 including:

The Guardian newspaper (online) has a special section, Charles Dickens at 200 that includes some digested reads of Dickens novels, podcasts and walking routes through the City of London to see key sites from novels. The site aims to explore the writer's life through stories, videos, audio and galleries.

If you are interested in finding secondary source material on this topic then you can search Copac for related materials. Copac includes the catalogues of the University of Cambridge, University of Oxford, British Library and V&A National Art Library in particular, which all have large amounts of Dickens related material.