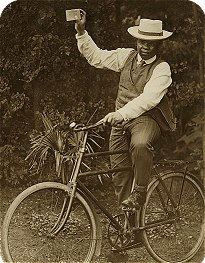 Right: Photograph of Sol Plaatje (1876-1932), South African Nationalist, on bicycle, probably taken in South Africa between 1917 and 1919 when Plaatje was travelling through the countryside investigating the effects of the Natives' Land Act of 1913. Photograph by permission of SOAS Library, and cannot be reproduced without permission.

The Hub includes descriptions for the papers of: