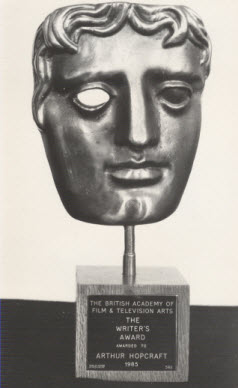 © Image Courtesy of the University of Salford, Archives and Special Collections

Arthur Hopcraft (1932-2004) was one of the great scriptwriters of his day, well known for his TV plays such as The Nearly Man, and for his small screen adaptations such as Tinker, Tailor, Soldier, Spy, Hard Times and Bleak House. Before taking up writing for TV, he was a highly respected sports journalist for the Guardian and the Observer, writing The Football Man: People and Passions in Soccer (1968), generally regarded as a masterpiece among sports books. He also had four other books published, including an autobiographical account of his childhood, and wrote the screenplay for the film Hostage. Hopcraft won the BAFTA writer’s award in 1985, but found it increasingly difficult to adapt to the changing demands of TV writing, what he called “being alternatively patronised and bullied by girls called Fiona flourishing clipboards”.

by Ian Johnston, University of Salford, Archives and Special Collections.

Links are provided to records on Copac for these items. Copac is a merged online catalogues of many major University, Specialist, and National Libraries in the UK and Ireland, including the British Library. For more information about accessing items see the FAQs on the Copac website.