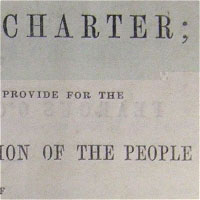 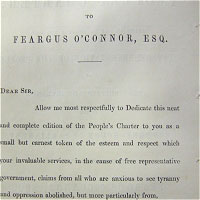 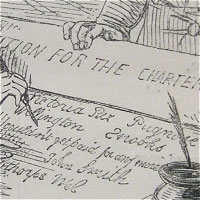 Chartism was a political and social movement in the United Kingdom that lasted approximately ten years from 1838-48. The name Chartism stems from the six point People's Charter that was drawn up in 1838. The movement grew from dissatisfaction with the 1832 Reform Act, which had failed to deliver the promise of an increased number of those who were eligible to vote.

The movement, led by William Lovett, Henry Hetherington, John Cleave and later Feargus O’Connor stemmed from the setting up of the London Working Men’s Association, formed by Lovett in 1836. In 1838, a six point charter was drawn up listing their political demands. These were:

Towards the end of the 1830s, Chartism became more of a working class movement, rather than a movement of skilled artisans, and had spread throughout the country. By 1842, William Lovett had retired from politics and devoted his time to the education of the working class. In 1848, Feargus O’Connor led a mass meeting on Kennington Common, which would involve a public meeting and a procession on Parliament to present a petition. O’Connor alleged that there were over five million signatures on the petition when this figure was actually closer to one million, with many of this number being forgeries. This, along with O’Connor’s increasingly erratic behaviour, led to the demise of the movement by 1848

Descriptions for the papers of William Lovett, held at University of London Library can be seen on the Archives Hub, as can that for the papers of George Jacob Holyoake, a journalist and 'moral force' Chartist, held by the National Co-operative Archive.

This month the Hub highlights descriptions for the papers of other supporters of Chartism, and witnesses and opponents to the movement. There are also links to selected websites and a brief bibliography.