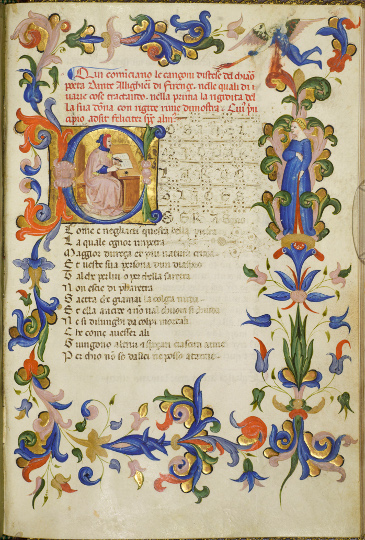 © Image courtesy of John Rylands Library, The University of Manchester

In June 2011 the University of Manchester and Mimas (which runs the Archives Hub) were awarded Jisc funding to develop an Augmented Reality application for special collections, based upon the outstanding rare books, manuscripts and archives housed in the John Rylands Library.

What is Augmented Reality?

Augmented Reality (AR), as the name implies, is a way of enhancing our perception and understanding of the ‘real’ world by blending it with digital resources such as audio, video, graphics and textual data in real time; unlike Virtual Reality, it does not seek to replace the analogue world, but to supplement and enrich it. It does this by using visual cues to trigger the uploading of information onto a mobile device such as a 3G phone or tablet PC. We are all now familiar with QR codes – those little boxes that look like a cross between a barcode and a chess board, which appear on everything from magazines to cornflakes packets – but in fact any visual object can serve as a trigger: a book cover, a picture, an architectural feature or even a landscape. Using AR for the first time can be quite a mind-blowing experience, as the device ‘grabs’ the object and manipulates it in real time, moving it as you move the mobile device. 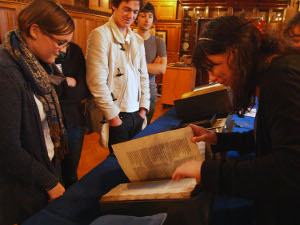 © Image courtesy of Mimas, The University of Manchester

The SCARLET project (Special Collections using Augmented Reality to Enhance Learning and Teaching) addresses one of the main obstacles to the use of special collections in teaching and learning – the fact that students are required to consult archives, manuscripts and rare books within the controlled conditions of reading-rooms or search-rooms, isolated from much of the secondary, supporting materials and a growing mass of related digital assets. This is an unfamiliar experience for students who are accustomed to an information-rich wireless world, and it is therefore perceived to be a barrier to their use of special collections. 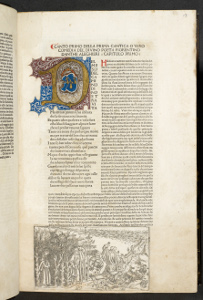 © Image courtesy of John Rylands Library, The University of Manchester

The project is a three-way partnership between Mimas, the John Rylands Library and academics within the University of Manchester’s Faculty of Humanities. The involvement of three award-winning teachers has ensured that the applications are rooted in pedagogical needs and that the technology facilitates learning, rather than being just an end itself. The SCARLET ‘app’ now enables students to study early editions of Dante’s Divine Comedy, for example, while simultaneous viewing catalogue data, digital images, webpages and online learning resources on their tablet devices and phones. Feedback from the students has been really positive: they see the benefits of being able to videos produced by their tutor, digitised images and catalogue information while simultaneously handling the real thing. 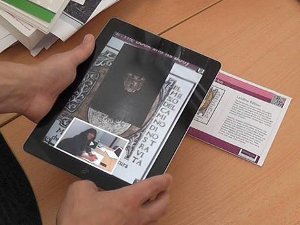 © Image courtesy of Mimas, The University of Manchester

AR has never before been used to enhance the experience of using special collections material for teaching and learning. It has potential to revolutionise practice in this field, helping students to engage with primary source materials and linking fragile and rare objects with online resources. The SCARLET project could also be highly influential in demonstrating how institutions could use AR to enhance the learning experience across the curriculum. It also has obvious potential for engaging schools groups. One issue that needs to be addressed is that fact that not everyone (this writer included) has a suitable mobile device. For the SCARLET project the Library invested in a suite of iPads, which are lent out to students during seminars.

The SCARLET blog provides an engaging record of the project development process from the diverse perspectives of librarians, archivists, academics and learning technologists. Ultimately the blog will provide access to an online toolkit, enabling other libraries and archives to develop similar applications.


Highlights from the blog include a blog post by Matt Ramirez of Mimas with a link to a video Mapping out a User Journey; this is using the prototype as of September 2011. Also a blog post by John Hodgson of John Rylands University Library Special Collections titled Blowing the dust off Special Collections explaining how augmented reality is allowing special collections to be brought "into the age of the app".

Explore all the Special Collections of the John Rylands Library.

© Images courtesy of Mimas and John Rylands Library, The University of Manchester

If you are interested in finding secondary source material on this topic then you can search Copac for related materials. Copac includes the catalogue of John Rylands Library collections.